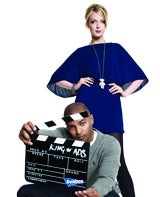 The crowdsourcing ad, which breaks today (16 February) will encourage users to come up with ideas and film them on a video camera to create a 29 second commercial to be uploaded online.

The makers of the Top 15 adverts will then be invited to pitch their Doritos TV ad to a panel of specially selected experts, which includes Bafta award-winning actor, director, and screenwriter Noel Clarke, TV and radio presenter Lauren Laverne and ad director David Shane.

The top three ads, as selected by the panel, will then be put to the public vote to decide whom the true King of Ads is.

The advert will be aired across British national television from 12 June to 11 July.

Pete Charles, marketing manager, Doritos, says: “This is an incredible opportunity for anyone wanting to make a name for themselves in the world of advertising or earn a life changing amount of money. In true Doritos style your adverts can be as bold, leftfield or as funny as you make them – good luck!”

The Doritos King of Ads competition opens to entrants on the 16 February and closes 30 April. Voting for the favourite ads opens from 29 May and closes on 10 June.

Agencies working on the product include AMV.BBDO, OMD, Initials and Frank PR.

Other companies to have taken a similar approach include Unilever’s Peperami, Samsung and T-Mobile

It is really frustrating to see a high number of big brands which are still not making the most of email marketing . We recently carried out research looking at the top 100 retail brands in the UK and found that 29% failed to even deliver regular email communication. But I think we are seeing […]

NBC Universal’s Sci-Fi channel is rebranding as Syfy in the UK to expand the perception of the channel.

Dementia charity, The Alzheimer’s Research Trust (ART), is launching its first TV fundraising campaign to boost support and donations to the charity.