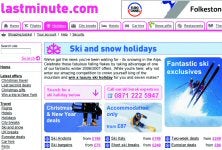 Sabre Holdings, owner of online travel brands Lastminute.com and Travelocity, announced last week that it is to be bought for $4.5bn (£2.2bn) by US private equity companies Silver Lake Partners and Texas Pacific Group.

The news attracted little attention as it was swiftly followed by TUI’s announcement that it is to cut 2,600 jobs in the UK at its Thomson brand.

TUI said Thomson had to reassess its business model because the UK market had changed significantly as a result of the internet and brands such as Lastminute.

Lastminute is one of the most recognisable of the online brands – a darling of the dot-coms – from which high street travel agents such as Thomson and First Choice face their greatest threat. As part of the Sabre sale, it is believed that both the Lastminute and Travelocity brands will be retained and continue to operate as usual.

Lastminute.com launched in 1998 with Brent Hoberman and Martha Lane Fox at the helm. It floated on the London stock exchange at the peak of the dot-com boom and expanded rapidly, enabling it to survive the bursting of the dot-com bubble. At a time when 130 online firms crashed, costing 8,000 jobs, Lastminute battled through.

The online travel and leisure site was sold to Sabre Holdings for just over $1bn (£573m) last year and although Hoberman stayed on initially, he stood down as chief executive earlier this year. Lane Fox left the business in 2003.

Interbrand chairman Rita Clifton says Lastminute’s business model was a winning one from the outset. “It is based on a very strong, simple idea,” she says. “Unlike other dot-coms, its business idea was enabled by technology. With the likes of Boo.com, people were unsure at the time about buying fashion online, but for leisure and travel it was a different matter.”

She says the founders, Hoberman and Fox, were not dot-com geeks: “They spoke sensibly about the business, rather than using jargon to get their message across.” She believes the challenge facing the brand in the future is how to keep ahead of the rash of recent entrants to the market.

The travel sector has been revolutionised by the internet and offers consumers more choice than ever. At the Association of British Travel Agents conference in Marbella last month, PricewaterhouseCoopers associate director Guy Gillon said fewer consumers now take the traditional package tour, opting for mix-and-match packages – made much easier with the internet.

Mark McCulloch, head of brand development at Lastminute, says the group is very aware of the challenges ahead and is focusing on giving consumers what they want. That was the reason behind last month’s appointment of Touch Clarity to handle behavioural targeting. The e-tailer says it aims to ensure the most relevant offers and best-performing creative is seen by site visitors.

McCulloch adds: “Our core strategy has not changed – we’ve always stuck to the focus of travel and leisure. We see the site as akin to a social assistant helping you plan your leisure time.

“People want relevance, good prices – be that low cost or good value – and ease of use. They want to create their own packages – holidays on demand – and we are focused on getting the best deals and products for them. We want to be the consumer champion”While it may be investing heavily in customer relationship management tools, Lastminute is also looking to build brand awareness and advocacy. It has strong links with affiliate partners and has embarked on tie-ups with companies such as Coolgorilla, which provides Lastminute customers with free phrasebooks to download.

Aside from its strong product offering, its brand image has always stood it in good stead, says Clifton, although she adds that it has suffered from bad publicity surrounding poor quality hotels and pricing issues.

“Its strength,” adds Clifton, “is that the site is not just functional. There is an emotional, almost romantic, attachment to Lastminute that does not exist for other sites.”

She adds that while competition is increasing in the online travel sector, Lastminute has a strong brand heritage that it can build on. However, she warns that it must ensure it has the products that people really want if it is to grow.

Yet, despite new tie-ups promised for next year and greater targeting, analysts at Mintel suggest the brand needs to move faster and harder if it is to keep ahead of its rivals.

A spokesman says: “It’s hard to know how it’s doing financially. According to Hitwise, visitor numbers are up 23% – but that’s not as good as Expedia and First Choice, which are up 25%. It’s holding its own but doing nothing spectacular.”

He says Lastminute is particularly attractive to the rapidly expanding 45- to 54-year-old age group, who are increasingly turning to the internet to book holidays. But he adds that the larger travel groups are driving their online offer as they seek to cut costs.

While McCulloch is not complacent about the increase in competition in the sector, he is optimistic: “No other brand owns the online travel and leisure space as we do.”

Facts and figures
1998 Lastminute.com launched by Brent Hoberman and Martha Lane Fox
2000 Floats on the London stock exchange at the peak of the dot-com boom – valued at £400m when only 14 months old
2003 Lane Fox departs
2005 Sold to Sabre Holdings, owner of Travelocity, for just over $1bn (£573m)
2006 US private equity companies Silver Lake Partners and Texas Pacific Group announce they are to buy Sabre Holdings for $4.5bn (£2.2bn)

What made you want to get into marketing? The thrill of selling supported by thought.

Stella Artois is ending its relationship with Channel 4’s film strand after eight years because of fears that the material was becoming “wallpaper” to viewers. The sponsorship deal – which is believed to be worth between £1m and £1.5m a year – currently includes credits around certain films shown on C4 and FilmFour, and also […]