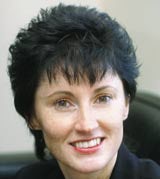 Mystery engulfs Bacardi-Martini’s newly promoted US president Stella David’s role, as reports suggest that she does not have a “confirmed” position to go to.

Her promotion was announced in October last year, as exclusively reported in Marketing Week. She has since been replaced by John Beard, the vice-president of emerging markets for Bacardi, as the new UK managing director (MW October 28, 2004).

In the US, she was supposed to have replaced Eduardo Sardina, a Bacardi family member by marriage, who was reported to be retiring this year. One official from Bacardi-Miami office confirms that there has been no confirmation of Sardina’s retirement or of David’s appointment.

One source adds that her promotion has been in limbo since the resignation of her “mentor” Javier Ferran, the company’s chief executive, late last year.

David is since reported to be on holiday, and the UK press office has yet to give any conclusive indication on her position.