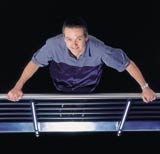 A casual-dressing former margarine marketer and practising Christian was the surprise choice of Channel 4 last week for its new chief executive.

Breaking the mould, the “risk-taking” public service broadcaster will for the first time be headed by someone who has no experience of programme-making, commissioning or scheduling: BBC marketing chief and former Unilever marketer Andy Duncan.

There had been growing speculation that the ambitious 41-year-old director of marketing, communications and audiences was ready to move from the BBC. It came after his successful launch of Freeview, of which he was chairman, and the unexpected departure of former director-general Greg Dyke following the Hutton Inquiry.

Many had thought that if Dyke were to replace Charles Allen as chief executive of ITV, Duncan would be sure to follow him there. But officially no one had linked Duncan, a former European category director for the food and beverages division at Unilever, with the Channel 4 job. The post had been left vacant when Mark Thompson left to become the Beeb’s new director-general.

There had been rumours that Channel 4 chairman and former Pizza Express entrepreneur Luke Johnson was looking for someone with business experience to fill the role. And he wanted someone to complement the strong programme pedigree of Channel 4 director of television Kevin Lygo. Explaining his choice of chief executive, Johnson says: “Duncan’s skills will be very complementary to Kevin Lygo and the rest of the Channel 4 management team.”

But not everyone is convinced a public service broadcaster without a programmer at the helm is a good thing. One industry insider says: “I do think it’s a bit of a risk for one of our public service terrestrial channels to have a chairman and chief executive neither of whom are steeped in a broadcast programme-making background.”

The initial surprise over Duncan’s appointment has for many been tempered by the fact that the main challenges facing Channel 4 are strategic. Thompson had returned the organisation to profit through heavy cost-cutting.

Duncan’s experience in launching Freeview based on one simple proposition – access to more channels by paying a one-off fee for a set-top box – and in other digital services, such as BBC3, CBeebies and 5LiveSports Extra, will stand him in good stead. He will have to decide whether Channel 4 should stay as it is, change to trust status or merge with Five as it prepares for the next ten to 20 years.

Duncan himself has made it clear his role is to look at big strategic issues intended to “future proof” Channel 4 for the digital age, not to “micro-manage” Lygo or to do his job for him. But given the difficulties the BBC has experienced following the Hutton affair and more recently the Channel 4 furore over the Big Brother knife incident, Duncan would be a fool not to keep a close eye on programming. Ultimately, it is his head that’s on the block as chief executive.

Labelled a margarine salesman when he arrived at the BBC, Duncan made it one of his first priorities to understand the needs of commissioners and channel controllers and win them over to his way of thinking. Hugh Cameron, joint managing director of DFGW, one of the BBC’s creative agencies, said he was able to do so by using a combination of “diplomacy and humility” and by being naturally “motivating” and “inclusive”.

Described by many as a team player, Duncan also knows his own mind. No doubt this helped him set about introducing a system of prioritisation at the BBC by ascertaining which programmes and initiatives needed marketing support (MW June 14, 2001). He also brought in the equivalent of advertising agency planners – experts in consumer insight – alongside commissioners and programme development teams.

Dyke, who is said by some to have treated Duncan as something of a protÃ©gÃ©, says: “He is remarkable at getting people on side. He took what he learned at Unilever and applied it to the BBC brilliantly.”

Dyke made no secret of the fact that he thought marketing would become increasingly important for broadcasters over the next decade. As more viewers take up digital television, and use modern technology such as personal video recorders and broadband to watch programmes whenever they want, marketing will become pivotal to survival.

Speaking at the Royal Television Society’s conference in Cambridge last year Dyke said: “As technology changes, getting people to know what you have got becomes harder and that requires marketing. You can no longer justify spending large amounts on programmes without letting people know they are there.” (MW September 25, 2003.)

That must have been on Johnson’s mind when appointing Duncan. “Having a brand specialist like Andy at the helm will offer us a competitive advantage in such a noisy and overcrowded market,” he says.

But other major TV broadcasters do not seem to be putting the same emphasis on marketing. Five is not expected to replace former board-level director of strategy and marketing David Pullan; ITV has been reluctant to significantly increase its off-air marketing budget, one of the reasons said to have contributed to Jim Hytner’s forthcoming departure; and it is not clear whether Thompson will be prepared to give another marketer the same degree of power Duncan was permitted at the BBC.

Duncan has yet to reveal how he proposes to prepare Channel 4 for digital switchover. His aim is for C4 to remain “at least as strong, if not stronger, than today in its reach and share of key audiences, creative impact and brand image, and its ability to stand out and be distinctive”.

The broadcaster has retained its 20 per cent share of total advertising revenue for the past three years and is on track to do so again this year, despite the threat from multi-channel TV. But C4’s share of adult impacts declined from 19 per cent in 1997 to 17 per cent in 2003, and is expected to fall further to 16 per cent in 2004 (Billetts). Zenith Optimedia TV director Chris Hayward says: “Channel 4 needs to make sure that it is known for its edgy and innovative programming, but not at the expense of audience.”

More new programmes, such as No Angels and Shameless, will have to be developed to replace popular American series that have come to an end, such as Sex and the City. The channel also faces the task of replacing Big Brother, the contract for which expires next year and on which the channel is arguably over-reliant.

Looking forward, the broadcaster’s other digital channels – the subscription-only E4 and the soon to be launched non-subscription based channel More 4 – will become “critically important” in order to help maintain the broadcaster’s share of revenue and overall audience levels, says MindShare broadcast director Andy Zonfrillo.

Platform issues also need to be considered in relation to these channels. At the BBC, Duncan appealed to other broadcasters to air unencrypted programmes via satellite. He was one of the first to spot the potential for paid-for channels to switch to being free, as increased advertising revenue from a wider audience could more than offset subscription revenues. But BSkyB has since announced its own “free-sat” initiative and Channel 4 has just renewed its deal with BSkyB until 2007, so some of these platform issues have, at least in the short term, been framed already.

Yet if Channel 4 is to continue investing in new programming and launch more channels, it will arguably need more income. Group turnover for 2003 of £770m was almost constant compared with 2002, and profit before tax rose to £45.3m from £16.5m the previous year, mainly through cost-cutting. Advertising and sponsorship revenue accounts for 89 per cent of group turnover but is vulnerable to a downturn, while its commercial arm, 4 Ventures, is only just starting to make an operating profit, so Channel 4 has been looking at other ways to raise revenues. This has become even more important as a merged ITV is also expected to put pressure on commercial broadcasters, which have begun to consider pooling their sales operations to compete.

It is not clear whether Duncan will back Thompson’s plans for a possible merger of Channel 4 with Five, or a change in its status to that of a trust with fewer borrowing restrictions. In the immediate future, he will also have to deal with Ofcom’s public service broadcasting review as well as the BBC charter review – this time from the perspective of a commercial rival.

Over the next month or so, expect a reclusive Duncan as he consults everyone at Channel 4, just as he did at the BBC. But once his strategy is in place you can be sure that he will pursue it with the evangelical zeal and commercial nous he displayed at both the BBC and Freeview.