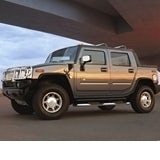 As observers predict a slowdown in the US economy, car sales have slumped and US-owned producers are losing out to Japanese rivals

Of course, there are many economic and political factors that make them tick the “more likely” box when asked about their expectations of a downturn. With upheaval in the Middle East and the renewed spectre of terrorist attacks on America it is perhaps no wonder executives are being more cautious than before.

Add to this the runaway prices of crude oil, the impact of which has been further exacerbated in the US by this month’s decision by BP to close part of an Alaskan oilfield that accounts for 8% of the country’s crude oil production.

This means gas prices are comfortably above the $3-a-gallon mark in some big cities, and in California, which has quite high environmental taxes, prices are hovering dangerously close to $4.

Compared to the UK these prices are still laughably low but this is a country, New York aside, which pretty much runs completely by the motor car so the price rises are significant.

There are already signs that consumers are steeling themselves for relatively high gas prices for the medium to long term and none more so than in car sales.

The latest figures from car sales data agency, Autodata, for July showed sales were down overall year on year by 17.4% and also fell for the first six months of the year. Trends point to sales being down significantly for the whole year.

For July, sales were down in part due to heavy discount price promotions that the Big Three US car makers – General Motors, Ford and Chrysler – ran in July 2005 which drove sales up significantly at the time. But this July sales were down noticeably for all three.

But the real story was that Japanese car maker Toyota overtook Ford for the first time to become the second-biggest car company in the country by sales. According to Autodata, Toyota bucked a wider downward car sales trend and rose 11.7% year on year with sales of 241,826 units. All of Ford’s brands were said to have seen sales declines resulting in a total drop of 34.3% to 239,989 cars and trucks.

Analysts and Toyota spokespeople alike have pointed to the trend to smaller mid-range and compact sedans – as they’re known here – with Americans taking their belts in a notch when budgeting for higher gas prices.

If this is true then Toyota brands like the Camry and Corolla, already popular for their perceived reliability, will also benefit for being seen as fuel efficient.

And it’s not just Toyota’s sedans. Even its sports utility vehicle (SUV) brand seems to be benefiting from a trend towards fuel efficiency. Autodata’s figures show that Toyota’s redesigned RAV 4, a compact SUV that can average 25 miles per gallon, outsold Ford’s 15 mpg Expedition SUV by 14,755 to 6,705 units. Just a year earlier, the Expedition sold 15,733 to the RAV 4’s 7,394.

Since the half-year sales figures came out things have gone from bad to worse for Ford. Family scion and chief executive Bill Ford Jr announced last Friday that the company is slashing production by a whopping 20% in the fourth quarter of the year. This, of course, means job cuts at Detroit’s oldest car company, and in an e-mail to staff last week Ford Jr blamed an “unprecedented spike” in gasoline prices during the second quarter that he said impacted the company’s product line-up more than that of competitors because of the “longstanding success of our trucks and SUVs”.

Ironically, as a recent New York Times article pointed out, Toyota and other Japanese automakers only took root in the US 30 years ago after politicians and automaker union officials lobbied the US Congress to force foreign carmakers, which wanted more market share, to open factories in the US.

At the time it was seen as a way of slowing down Asian carmakers, but as we now know it had completely the opposite effect of entrenching them in the US. Others that did well in July include Honda, which was up 6%, and South Korea’s Hyundai, which was up more than 10%. 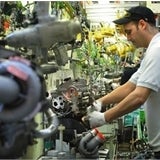 So what role will marketing play in Detroit’s fightback against the mighty Japanese? US-owned brands have all been stepping up their overall corporate image in various ways as they jointly spend nearly $2bn (&£1.06bn) a year on advertising. Overall, it’s a mixed bag to say the least, but there are a couple of things that have caught the eye.

GM seems to be standing behind its gas-guzzling bÃªte noire of environmentalists, the Hummer, with a new push in partnership with McDonald’s.

This summer the two are combining to put toy Hummers in children’s Happy Meal boxes, in a promotion called “Hummer of a Summer” which is also being supported with television and radio ads. The campaign has, unsurprisingly perhaps, drawn the ire of environmental groups and children’s advertising watchdogs alike according to reports.

However, the campaign that has been the talk of car advertising circles and beyond this summer has been the “Ask Dr Z” ads from Chrysler.

In a series of BBDO Detroit ad spots which started running last month, DaimlerChrysler chairman Dieter Zetsche, operating under the sobriquet Dr Z, plays a balding, middle aged man with a walrus moustache and a thick German accent/ in other words he plays himself.

In one spot he is asked about the benefits of the 1998 merger of Daimler-Benz and Chrysler as he takes a 300C through its paces on an obstacle course. In another he’s asked by a young child if his moustache is real.

Ad watchers are divided over whether the campaign has been successful in getting across the message of the employee discount price promotion it was originally meant to support – July sales figures suggest not: Chrysler US sales were down 37%.

But Chrysler argues that the $100m (&£52.75m) campaign has been more about communicating the benefits of being part of a global carmaker – taking advantage of a general perception by Americans that foreign-made or -designed cars are better than locally made ones. The sales figures do say that foreign is better at the moment despite the best flag-waving tactics of Detroit.

Of course, if you’re going to tout great automotive engineering some observers say you could do a lot worse than communicating that in a German accent.

Safety to the fore in ads

Other ads with a German accent, in terms of engineering heritage, but with an emphasis on safety are a couple of spots from Volkswagen for its new Jetta, which were launched earlier this year through Miami’s Crispin, Porter & Bogusky.

The spots turn numerous drink-driving ads on their heads while still using the same shock factor, which make them memorable. The ads, originally launched in spring, try and promote the 2006 Jetta’s top scores in crash tests including a “four-star front-impact crash rating” and “highest government side-impact crash rating”.

In one of the ads, the camera is in the back seat as two friends chat away, lost in an argument, when a truck suddenly backs into their path, setting off airbags as they crash with all the stark realism and unexpectedness of many a drink-driving campaign.

In the next scene we see the two friends shaken but unharmed as they look over their damaged car, with the screen reading “Safe happens”. USA Today reported that Volkswagen said requests for brochures for the Jetta were up nearly 40% at its call centres and 60% on the Web soon after the ads broke.

VW and CP&B also combined this summer to welcome back the Rabbit. The Rabbit is, as you may know, the VW Golf outside North America and has not been in US dealerships since 1984. The poster ads are localised to different cities to say: “The Rabbit is back…in New York”. I am sure others have noted that the last time the Rabbit was launched in the US there was severe unrest in the Middle East and gasoline prices were out of control. Welcome back indeed.