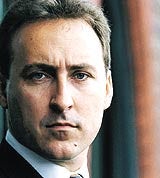 Chris Lovell, UK managing director of below-the-line agency DraftWorldwide and the key driver of the UK business, has resigned over “differences in strategic vision” and will leave the company in October.

DraftWorldwide president for Europe Jean-Paul Dupuy says he has not decided whether to replace Lovell or to restructure the senior level.

He says: “Lovell’s departure has taken us by surprise and we have not worked out how to fill the gap. But it will not destabilise our operation in the short term because each UK division has its own head.”

Lovell co-founded agency Lovell Vass Boddey, which was acquired by DraftWorldwide in 1997 to be its UK branch.

Dupuy adds: “Lovell left because of differences in strategic vision, but I can’t go into details. I don’t think he has a job to go to.” Lovell was unavailable for comment.