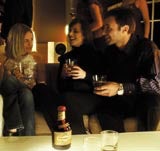 Drambuie Liqueur in the UK is reviewing its &£1m media planning and buying account at Burkitt DDB. The agency was also the incumbent on the advertising business, which it recently lost globally to Soul.

The move follows the appointment of marketing director Caroline Sutcliffe to replace Patrick Venning, who has left without a job to go to (MW last week). Sutcliffe has shortlisted incumbent Burkitt DDB; Soul Space, the media arm of roster agency Soul; and Walker Media.

“The brand is in the process of being revamped to broaden the drink’s appeal and to increase focus on the social aspect of liqueur drinking,” she says.

The decision to review media planning and buying will not affect Soul’s hold on the brand’s advertising account. The agency also handles the Drambuie Cream brand in the UK, which it won two years ago after it pitched against cdp-travissully and Burkitt DDB.

Drambuie Cream was launched in the UK in 2000 and is aimed at a much younger market than its sister brand Drambuie Liqueur. The Cream brand is made with 15- to 17-year-old malt whiskies, cream and heather honey. It is positioned to compete with Diageo-owned Baileys.

Drambuie is distributed in the UK by Bacardi-Martini, which took over distribution in 2002.