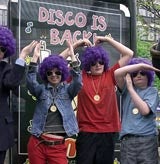 “V. I. M. T. O. It’s V, very scrummy, it’s I, it’s so fruity, it’s M, etc…” Twenty-five years ago, Ottowan could never have imagined that the hit D. I. S. C. O would have the ultimate honour bestowed upon it. Forget the Grammys, having a song adapted for a Vimto campaign, and in the form of a Purple Ronnie poem, must be about as good as it gets for ageing pop stars.

Looking at the picture (above right) however, the Diary, being the pedant it is, can’t help but wonder if an offshoot of the fruit drink is being launched. The five purple-haired funksters are quite clearly (well, fairly clearly) spelling out “Vumto”. Then again, as the drink is basing its “Seventies retro theme” around a song from the Eighties, it could just be possible they are referring to Vimto.