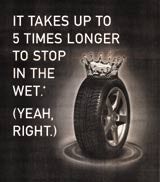 Goodyear Dunlop Tyres has been rapped by the Advertising Standards Authority for encouraging drivers to ignore Highway Code advice on stopping distances.

The advertising watchdog has upheld complaints against a press ad for the company, created by Claydon Heeley Jones Mason, which showed a tyre standing in water next to the headline: “It takes up to five times longer to stop in the wet. (Yeah, Right.)” The ad triggered ten complaints. The ASA ruled that the ad encouraged drivers to drive at unsafe speeds in wet conditions.

The ASA has partly upheld complaints about an ad for the Sunday Times with the tagline: “What turns businessmen on? Domination.” The press ad attracted 18 complaints on differing grounds including that it was sexist, discriminatory, irresponsible, offensive and misleading.

The ASA ruled that the ad was misleading, only on the grounds that the advertiser used the term “businessmen” to refer to both businessmen and businesswomen.

The ASA is investigating a complaint from Tesco against rival Asda, over low-price claims in Asda’s ads. Tesco’s own ads, claiming that its electrical goods are 20 per cent cheaper than Argos’s, are also being investigated following a protest from the catalogue retailer.