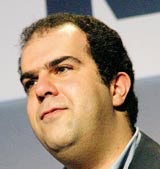 Stelios Haji-Ioannou is understood to be in talks with the Prince Charles cinema in London over a scheme to rebrand the venue as an easyCinema – Haji-Ioannou’s latest venture.

EasyCinema’s first cinema opens in Milton Keynes on May 23, and the company intends to offer cheaper ticket prices for early bookings made online. The company is still locked in negotiations with the UK distribution arms of Hollywood studios over access to the latest releases.

EasyGroup’s difficulty with the distributors concerns its business model. The company wants to pay a flat fee to hire first-run films, but historically distributors have demanded a percentage of the take for each film. EasyGroup has instructed its lawyers to discuss the issue with the Office of Fair Trading.

The Prince Charles, an independent West End cinema that specialises in second runs of successful films, has been hunting for a title sponsor (MW April 24).

Ben Freedman, managing director of Bubble Chamber, which owns the Prince Charles, says: “We have not ruled out any talks with Haji-Ioannou, but we think the venue has a value in cash terms and are still looking for a cash sponsor. Let’s see what happens in Milton Keynes.”