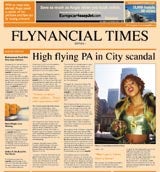 EasyJet is creating a one-off spoof of the Financial Times in a bid to promote its service to businessmen.

The Flynancial Times will be carried and read by bowler-hatted, besuited men on public transport around central London today (Wednesday). The paper will be printed in the familiar pink of financial pages.

It will carry easyJet news and has an invented front-page story about PA Angie Chavette, who saved several thousand pounds by diverting senior executives on to easyJet and pocketed the difference. The newspaper also opens out to reveal the latest easyJet advertising strapline “You’re in business, you work it out”.

The stunt has been devised by The Bank, which has also created a national press campaign for the low-cost airline that is running in the quality press. The strategy to target the business community was devised by the agency and interim director Rebecca Butler.

The Bank chief executive Will Harris says: “The airline is making a much more grown-up and sensible approach to reach the business community.”