The budget airline’s CEO, who was a speaker at the Omniwomen UK Leadership Summit today (8 March) held for International Women’s Day and aims to inspire senior women in business, said while more women are steadily reaching senior positions, the pace of change is “very slow”.

She told Marketing Week: “There are not enough executive women coming through to sit on executive boards, which is where change happens. For me, the focus [should be] on executive women. That’s what we’ve done at EasyJet. It’s all about the executive stream of women, retaining them, developing them and making sure they have the confidence [to progress].”

McCall, who calls herself “a marketer by background”, originally joined The Guardian in the late eighties as a research planner and worked her way up to become the brand’s chief executive. She consequently joined easyJet in 2010, growing the company’s annual passengers to 69 million. According to McCall, more women need to develop their confidence as it will help them negotiate future challenges.

“Women have to feel confident in their own ability, as they can then go to their boss and say: ‘I really love what I do and want to stay, but it would make it easier if I did my job this way and can we talk about that?’. But they need to have the confidence to have that conversation,” she said.

Other challenges that cause women to “drop off” and miss out on senior roles are expensive childcare and inflexible companies. A 2014 study by the Institute of Practitioners in Advertising showed that while the UK marketing profession had an overall male/female split of 50:50, only a quarter of top jobs in marketing were occupied by women in 2014. However, this figure has grown from 22.2% the previous year.

“Childcare becomes very expensive and women don’t get any tax relief. Many women will spend almost all their earnings in the first few years on childcare,” she commented.

“It’s proven that women get to a stage where they’d rather work for themselves instead of a corporate structure that they find exhausting, as they have to negotiate and navigate to get what they want.”

She used the example of her own company easyJet, which she says has implemented various schemes to make sure it retains its female talent. These include job sharing and offering four day weeks.

“[These schemes] make it that little bit easier for women to come back to work full time – and they all do eventually. If women don’t ask, or their company is not receptive, then you lose women.”

McCall is also adamant that companies must not to exclude men from the process.

She concluded: “The men at easyJet are very happy about [the company’s schemes] because it helps us all retain talent. It’s important that it’s not polarising in any way, but I do feel that there is a long way to go until there are a lot more women in executive positions.” 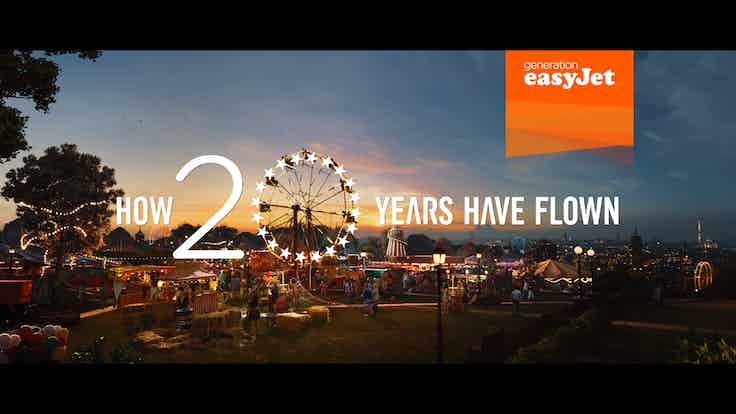 Easyjet has launched a £10m European campaign to mark its 20th anniversary – combining a love story with a retro throwback to its very first ad from 1995 – as it looks to combine its price-led messaging with a more emotive style of storytelling.

EasyJet CEO’s Carolyn McCall believes that any company interested in building a business for the long-term rather than short-term profitability should be focused on customer service and meeting customer expectations.