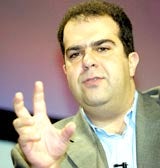 EasyGroup is looking for a marketing chief to join its financial services division, easyMoney.com, which launches this summer.

The company has advertised for a chief executive and a media buyer, and will be looking for a marketing manager and marketing director as the company grows later in the year.

EasyGroup director of corporate affairs James Rothnie says a chief executive will be recruited to coincide with the launch, which he is currently overseeing alongside easyGroup’s founder, Stelios Haji-Ioannou. The chief executive will oversee marketing until a full-time marketer is found.

The company has no plans to recruit a creative agency for easyMoney, in line with its policy of handling advertising in-house.

EasyMoney will be launched with a credit card, joining the rash of companies currently offering cards with low introductory rates of interest. But Rothnie says easyMoney will be aimed primarily at the loans market, providing cheap loans.

The company will operate solely through the Internet, a policy which has helped to keep costs low at sister company easyJet, Rothnie adds.