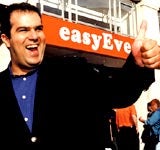 New PHD has been appointed to handle the &£5m UK media and buying account for EasyRentacar, after the chain dropped incumbent agency MindShare.

The account will be run alongside those in the company’s other three main markets. Media Planning handles the business in Spain and independent agencies hold the business in France and Holland.

MindShare split with EasyRentacar, a subsidiary of entrepreneur Stelios Haji-Ioannou’s EasyGroup company, only three months after winning the pan-European account, valued at &£12m, because of disagreements over media strategy.

EasyGroup director of corporate affairs James Rothnie says that although there are no immediate plans to consolidate pan-European media, into New PHD, it remains a possibility if the agency “proves itself”.

All Easy brand creative work is carried out in house.

EasyRentacar launched last Easter, as the first online car rental company. The company aims to be a major player in the rental market by its third year.

“EasyRentacar started with 4,000 A-class Mercedes in its first year, increasing that to 9,000 in its second. You need a 30,000-strong fleet to be big player in this market. By our third year of operations EasyRentacar may well be there,” adds Rothnie.

This summer, the EasyGroup is launching EasyMoney, an online financial services company. Rothnie says the launch is likely focus on a credit card service.

With only a single product available, Rothnie says it is likely media buying for EasyMoney will be handled in house.