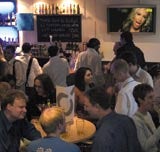 The drinks industry has slammed plans by the European Commission to use taxes on alcohol to finance responsible drinking campaigns.

It is understood that the EC will propose the plan in a forthcoming paper on the most effective policies to reduce alcohol-related harm. Consumer education campaigns funded by taxes on alcohol are likely to be one of the key proposals made in the paper.

But key drinks industry figures have hit out against the plans. John Corbet-Milward, head of technical and international affairs at the Wine &amp; Spirit Trade Association, says any levy would be “a Draconian attempt to introduce another blanket tax on the sale of alcohol”. He added that he supports voluntary arrangements rather than compulsory taxation.

He adds/ “The Government already makes three or four times the amount that we do out of Wetherspoon’s. It would be yet another tax on an industry that is, after all, legal and already contributes its fair share.”

The plans were revealed by EC deputy head of cabinet for health and consumer protection Philippe Brunet, who was speaking at the European Forum for Responsible Drinking.

He said that funding was needed to inform consumers and raise awareness of the impact of alcohol, but he added that the commission did not know how it would obtain the funds.