Esure, the insurance brand famed for its quirky ads featuring Michael Winner, has shifted the emphasis of its marketing by signing up as the sponsor of ITV weather (MW last week).

It is a move designed to “humanise” the brand and distance itself from the cut-throat world of direct response advertising, in a sector where price comparison sites have changed the rules of the game.

The brainchild of Direct Line founder Peter Wood, esure was set up in 2001 and helped usher in a new era in the marketing of insurance companies. It 2005, Wood also launched Sheila’s Wheels, another insurance brand noted for its unconventional ads.

The eccentric ads for both brands, created in house, polarised the marketing industry and set a trend among insurers.

However, the rise of price comparison sites over the past three years has led to a change in the way customers approach insurance products. No longer do they contact a single insurer, rather they compare several products on the Web and then choose.

This has made brand awareness key and is the main reason esure has seemingly abandoned its direct response campaign style and agreed to pay £10m to become the sponsor of the ITV weather bulletin – the UK’s third biggest broadcast sponsorship deal.

Adrian Webb, head of corporate communications at esure, confirms that the brand’s focus is shifting as customer behaviour changes. “We will possibly be using the idents to bring more humanity to the brand,” he says.

Wood revolutionised the insurance market in the 1980s when he came up with the idea for Direct Line, the first telephone insurance brand, and its red telephone motif. “He effectively created the UK’s first call centre and shook up a market in which there was no churn,” adds Webb.

Wood hoped to repeat the feat, this time using the internet when he launched esure, and the brand grew quickly, attracting 1 million customers in just five years.

However, industry observers believe that while the brand has undoubtedly made a name for itself, it has confused the public.

Lucian Camp, chairman of agency CCHM:Ping, says: “There is a tug of war going on at the brand. On the one hand, there are professional marketers and agencies and, on the other, there is Peter, who has a more homespun and anarchic approach.

“Esure has become famous through its antics, but in terms of targeting a market and giving people reasons to prefer esure, I think it has wasted a lot of time and money on exhibitionism.”

Camp believes that the decision to move into sponsorship shows that the balance of power has shifted at esure’s headquarters. “I would have thought that this sponsorship represents a good tug on the rope by the marketers at esure.”

Esure’s launch campaign was created by Delaney Lund Knox Warren and used a blue giant character. However, Wood soon brought the account in house and a campaign, written and directed by its star, Michael Winner, was launched.

In 2005, esure decided to refocus, and in the same year launched spin-off brand Sheila’s Wheels. Wood turned to advertising veteran Chris Wilkins, the brains behind the Smash Martians, and his art director partner Sian Vickers. Together they developed the Mister Mouse character and the Sheila’s Wheels campaign.

Webb admits that when the Sheila’s Wheels ads were first developed “a lot of people were extremely nervous”.

But he adds: “Peter [Wood] said he did not care what the research said and that he wanted to go for it – and it has become the most extraordinary phenomenon.”

However, not all the ads have won approval. One commentator describes the Mister Mouse character as “charmless and unpleasant”, another says it can be filed alongside Shake’n’Vac and Ferrero Rocher ads in the “so bad it’s good” category.

But the campaigns have spawned a host of imitators in the insurance sector. Camp says: “You could see where it was coming from and you could see them trying to own the online market, but it has been playing the direct response game – it is advertising with the sole aim of making the phone ring. They don’t care if people like it or people engage with the brand, all they care about is whether the phone rings.”

He believes such an approach grates with many in the industry: “A lot of us worry about things like building long-term brand equity and reputation, but it seems that they don’t care. I think that although it knows its target market, the public doesn’t. It hasn’t displayed any consistency.”

Another industry expert says: “Peter is at least partly responsible for the welter of insurance ‘character ads’ out there. All these characters are battling each other, but faced with the choice between esure and, say, the AA or More Than, who would you choose? Once you have developed a presence you have to go somewhere with it.”

Esure’s Webb says the challenge now for insurance companies is to develop a presence like “wallpaper”.

“People are only in the market for insurance one day of the year,” he explains. “The challenge is to maintain brand awareness 365 days a year, because every day you have a different market. Sponsorship gives us an ideal vehicle of being on mainstream TV every day of the year. By taking on one of the biggest sponsorship properties we can leapfrog the noxious influence of competing insurance ads.” 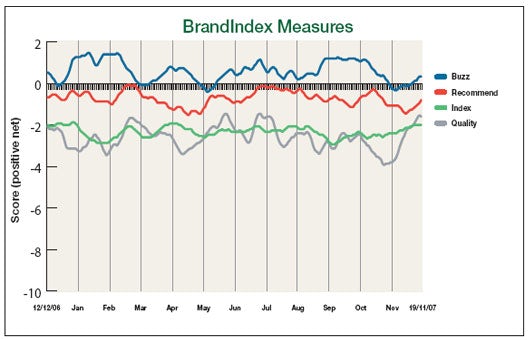