A coffee with Royal Mail media director Mark Thomson the other day gave me hope for the future of the postal service. Prior to meeting him I had none, but Thomson paints a rosy future for this creaky old institution.

It’s a future of smaller mail volumes made more valuable by greater targeting along with new roles and responsibilities for “the most trusted brand in the country”. “What other brand do consumers trust with the information they regularly volunteer to postmen, such as how long their house is going to be vacant while they go on holiday?” asks Thomson.

It’s a future of retail-led marketing initiatives and innovations, none of them more than ideas at present, such as a January sale with “20% off” all mail. Such a future would depend on Thomson’s attitude towards change spreading throughout the organisation. But this seems unlikely at a time when the Communications Workers Union is balloting its 121,000 members over proposals for a national strike. The news follows a summer of wildcat strikes that have undermined the possibility of genuine modernisation.

Meanwhile, Thomson describes a possible Royal Mail with the excitement of a man unfettered by the fact that the day before we met, he had covered for a striking local workforce by donning a postie’s uniform, getting in a van and making deliveries. Many of his better plans for the business cannot be repeated here for fear of affecting management relations with CWU members, who could see the suggestions as a creeping expansion of their responsibilities.

However you view the growing crisis at Royal Mail, the industrial action looks damaging to everyone, including those organising and taking part. On an economy-wide scale, the strikes have had disastrous (and largely unreported) consequences for the 4.7 million small businesses that account for more than 50% of the UK’s turnover. More than 70% of these businesses still rely heavily on Royal Mail services, according to the Federation of Small Businesses. The strikes are estimated to be costing many of the FSB’s members hundreds of pounds a day.

On an industry-wide scale, the threatened national action would exacerbate the pressure already burdening the direct mail industry. The Direct Marketing Association, aware that it already has a job to do to convince marketers that mail still merits a role within a modern integrated marketing mix, has appealed to the Government to intervene, and quickly.

In terms of the Royal Mail itself, YouGov’s BrandIndex measurement tool demonstrates that the public is rapidly losing interest in Royal Mail. The brand’s reputation has been severely dented by the industrial action, with its Buzz rating, a measure of whether people have heard positive or negative things about a brand, falling to an all-time low of -14 last week.

The strikes have caused a backlog of 20 million letters and parcels, with many items feared lost. Customers, with too many of their own problems to care about the trials of what they see as an outdated and irrelevant service, are turning to rivals. Postal analyst Post-Switch says an estimated 100 million extra bulk mail items were handled by Royal Mail’s competitors last month.

Even without the strikes, the structure of a digital world with new market rules means Royal Mail’s offer has declined in value. Royal Mail handles 10% less mail each year as the use of email and the internet grows. Yet the CWU was arguing last week that Royal Mail was putting staff under “intolerable pressure” to make efficiencies. The union also bemoans that agreements on modernisation, made in 2007, have been over-ruled and a pay freeze installed.

“Welcome to 2009,” the management should say. This is an era where next year’s General Election will be fought over spending cuts and where few agreements on working practices and conditions are left intact from the old world. Welcome to an economy where unemployment is soaring and where salary and recruitment freezes are the unfortunate norm.

The CWU bemoans that agreements on modernisation have been overruled and a pay freeze installed. ‘Welcome to 2009’, the management should say. This is an era where next year’s General Election will be fought over spending cuts and where few agreements on working practices and conditions are left intact from the old world.

What the economy desperately needs from us now is goodwill. There can’t be many people currently in work who don’t feel they are doing the jobs of two people. Flexibility, versatility and reliability are going to be the workforce’s most important assets for a while yet if we’re going to pull ourselves out of recession. This attitude should not just come from the bottom of the pyramid up but should be matched at the summit.

It is not just Royal Mail that needs to adjust to a new mindset. The reported reason for Tony Ball’s stand-off with ITV is also at odds with this new age. It was suggested in the Sunday newspapers that would-be ITV chief executive Ball is demanding a contract worth £30m in incentives over five years. The package would incorporate the ex-Sky boss being awarded share options backdated to the point in time where he leaked his interest in replacing Michael Grade, arguing that the announcement prompted a rally in the value of ITV shares.

There isn’t room here to pour sufficient scorn on Ball’s demands or deconstruct the implications for future board-level negotiations at companies wishing to appoint the right people. But deals with such high-falluting clauses belong to the “old world” where, in ITV’s case, impenetrable power came from unthreatened ad revenues, a lack of competition and consumers that depended on it for a disproportionate percentage of their entertainment.

In the new world, pay packages should reflect hard work, innovation, performance and results, not past reputations. I think it’s time for all of us to re-evaluate. 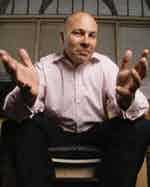 From Kraft and Cadbury to product placement and the role of the BBC, recent events in media show everyone fighting for the end-game