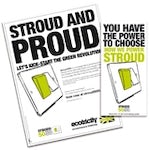 The “Stroud 50/50” campaign, created by direct marketing agency Entire is the first activity to use the brand’s new Revolutionary Thinking positioning.

It is hoping to generate over 3,000 local supporters to champion the idea of using 50% green energy to power their homes through press ads, online, door drops and local events.

The energy company says it would only take 16 wind turbines to generate enough electricity to power 50% of the homes in the Stroud area of Gloucestershire, England. Ecotricity has already built one wind farm there and is planning a second.

Dale Vince, Ecotricity founder and chief executive, says: “The 50/50 campaign is about powering half of Stroud’s homes from the wind, a local energy source that will never run out. We want local people to add their voices to ours and we’ll make it happen.”