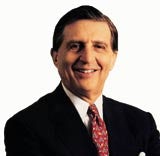 One perplexing aspect of Grey Global boss Ed Meyer putting the advertising network he controls up for sale is the role being played by investment bankers Goldman Sachs and JP Morgan Chase.

The independent agency group – which reported commissions and fees of $1.3bn (£697m) in 2003 through clients such as Procter &amp; Gamble, Mars, British American Tobacco and GlaxoSmithKline, has been the dark horse of agency consolidation for many years.

As the world’s seventh biggest advertising company, it risks being squeezed by the biggest groups, so a sale is seen as inevitable. Observers had wondered how long Grey’s boss Meyer would be able to hold out against acquisition by a rival group.

Now, it seems, the business is finally on the market. It was reported in the US press last month that Grey hired investment bankers to explore a possible sale of all, or part of, the business. Some see this as an indication that Meyer is looking for buyers outside the ad industry.

WPP Group now seems the only major contender in the field -Âalthough there are rumours of French agency group Havas showing interest. Publicis Groupe, at one time the favourite, has just pulled out. And Dentsu now seems an unlikely contender.

If so, Meyer’s investment bank tactic has probably misfired.

“You could argue that the investment bankers had persuaded Meyer there were other companies out there that might be interested,” says Bob Willott, editor of Marketing Services Financial Intelligence. “I am bemused as to why he has hired them. It takes five minutes to pick up the phone to Sir Martin Sorrell or Maurice Levy and he must already know their views. The situation won’t have changed very much.”

He speculates that the investment bankers may have talked the 77-year-old Meyer into believing their wide-ranging contacts with other companies could help start a bidding war between interested parties, therefore, driving up the price. He suggests entertainment groups or digital technology businesses may be on the list of possible buyers. Officially, Grey Global is refusing to comment on reports about the sale.

Its peculiar ownership structure may have influenced the timing. Grey has two classes of shares, which enable a structure to give Meyer, who owns an estimated 20 to 30 per cent of the stock, majority voting rights. These voting rights are thought to expire in about 18 months time, which might explain why Meyer has decided to put the company up for sale now. Grey’s share price has risen since stories about the sale appeared and the group is now valued at about $1.3bn (£697m).

One problem facing any company that acquires Grey is how to boost margins of about two or three per cent. Some suggest the low margins are a result of it servicing accounts at very low rates in order to hold on to business that it would lose if it charged full whack. There is also the question of Meyer’s remuneration, which is believed to be substantial, as well as the pay of top executives.

According to analyst Paul Richards at Numis Securities, WPP is well placed to buy Grey. “Almost by a process of elimination, it seems to be a foregone conclusion. WPP has been acquisitive over the years. It has the financial fire power and Grey’s management could be brought in line with industry best practice,” he says. To move Grey’s margins up to the industry standard of about 15 per cent, might mean cutting back on executive salaries, making redundancies and boosting the agency’s low-profile creative reputation.

Some think WPP’s strong relationship with Unilever could prove a client conflict too far for Procter &amp; Gamble, which puts much of its work through Grey. If Grey did fall to WPP, one source says it would represent an advertising revolution because it would redefine P&G’s attitude to agency conflict. But equally, if Publicis bought Grey, it would have meant P&G would have to rely on one agency group to service most of its advertising. This might also be deemed a step too far -Âin the process of consolidation. And indeed this seems to be the reason Publicis chairman Levy has pulled out of the auction for Grey.

Much will ride on the role given to Meyer after an acquisition, so it may not just be a question of selling to the highest bidder. He is still thought to be keen to maintain his grip over the agency and will insist on being able to keep a retinue of service staff and other perks. Whoever wins the takeover battle may have to build their plans around the vision of Meyer, advertising’s great survivor.