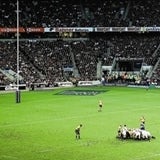 EDF Energy is boosting its commitment to UK sport with a three-year sponsorship deal with the Rugby Football Union (RFU) and club management body Premier Rugby.

The sponsorship also sees the company strike a blow against rival energy company Eon, as the deal will see the Anglo-Welsh Cup renamed the EDF Energy Cup. It was&nbsp;previously known as the Powergen Cup.

The sponsorship, which covers both professional and grass-roots rugby, will also include a further four English club tournaments – the National Trophy, Intermediate Cup, Junior Vase and the new Senior Vase.

EDF Energy is already involved with rugby as an official global partner of next year’s Rugby World Cup. In France, the energy company is a major partner of the Ligue Nationale de Rugby, the French professional league.

Vincent de Rivaz, chief executive of EDF Energy, says the sponsorship deal strengthens the French company’s relationship with English sport and its fans. He adds: “Our partnership with the RFU and Premier Rugby will help us build on the brand awareness generated by our successful sponsorship of the ITV World Cup coverage.

“It also enables a connection with almost 2,000 amateur clubs at the heart of their communities. For us, this grass-roots dimension is a vital part of developing our business and the relationship we want to have with our customers, our employees and the communities in which we live and work.” According to Premier Rugby, last year’s tournament attracted audiences of over 250,000 people, and attendances at the group stage showed a 12% increase on the previous year.

Last week, EDF announced price rises of up to 19% for domestic customers, blaming the continued high cost of energy. The increases came in the same week that the company was forced to cut power supplies in London, forcing many businesses to close for several hours at a time. The cuts were attributed to a higher demand for energy, due to the hot weather.