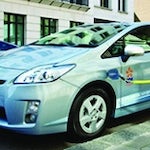 The ad was created by MPG Media Contacts and seeks to extend the ’Be a Part of it’ creative proposition, which was devised by Euro RSCG London.

The campaign airs this week on ITV, Channel 4, Five and other selected satellite and Freeview stations. Team Green Britain members feature in the ads, explaining what everyday actions they take to reduce their carbon emmissions.

EDF Energy marketing director Martin Stead says: “The final advert in this year’s campaign is designed to thank the hundreds of thousands of people who’ve joined us on this journey by becoming part of Team Green Britain. Thousands of people got involved this year and we want to thank them all for playing their part.”

The ad campaign follows shorty after EDF’s Green Britain Day, which included a number of nationwide events, which were supported by above and below the line campaigns. The scheme was encouraged to teach people how they can live a lower carbon lifestyle.

The Green Britain initiative has received cross-party support from MPs such as Labour’s Ed Miliband and Liberal Democrat Don Foster.

Shadow Secretary of State for Energy and Climate Change Ed Miliband says: “Climate change is the biggest challenge the world faces and even the smallest changes to our daily lives can add up to a big difference. I encourage everyone to do something green for the team by joining Team Green Britain.”

EDF has been forced to defend its Green Britian Day campaign after rivals questioned its validity after the campaign attracted controversy when it first ran in 2009. Npower marketing director Kevin Peake said he was “totally stunned” EDF ran the campaign again after “it didn’t work last year and there was public outcry”.

EDF’s first Green Britain day resulted in British Gas slamming the company by stating it “is thinking about new ways to be green every single day”, as opposed to just one day a year. Energy company Ecotricity also threatened to sue EDF after claiming EDF has stolen its green union jack logo.