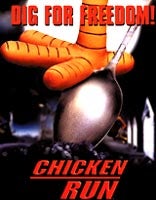 Games Publisher Eidos Interactive is bringing Nick Park’s animated characters to life on a video game format for the first time with the release of Chicken Run on PlayStation and Dreamcast.

Based on the adventure comedy by Park, creator of Wallace and Gromit, the game invites players to help the chickens escape from their pen using implements as diverse as fireworks and see-saws.

It is the first time that production company Aardman Animations, part-owned by Park, has licensed its characters to appear on a video-game.

The launch this week will be backed by a press and poster advertising campaign created by Curio, as well as a dedicated website (www.chickenrungame.com) featuring character profiles and links to the film’s website.

The game which has been developed by Blitz Games will be released on PC CD-Rom on December 8.

Wizards of the Coast, a division of US toy manufacturer Hasbro, is also hoping to cash in on the success of one of last year’s blockbusters by launching a Star Wars role-play game which allows players to create their own characters.

The game – which will not be released in the UK until next year – is similar in design to the classic Dungeons &amp; Dragons game, also published by Wizards of the Coast.

Using a rulebook containing information about various Star Wars characters and vehicles, players will be able to set their adventure in any time period of the Star Wars saga covered in the movies, novels and comic books.