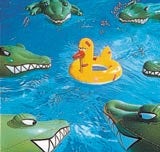 Nivea manufacturer Beiersdorf is to extend its Elastoplast wound care brand into the cosmetics market. This will be the brand’s first extension outside its core market since its 1922 launch.

The new product, Elastoplast Footcare, will be supported by a &£1.6m print and sampling campaign and is due to be launched in May.

Elastoplast Footcare will include a foot moisturiser, deodorant, corn and bunion relief pads, and plasters for blisters, bunions and corns.

The advertising for Beiersdorf’s Elastoplast range and the majority of its core Nivea beauty products is handled by TBWA/London. Banks Hoggins O’Shea FCB handles the creative work for Nivea for Men. Media buying and planning is through Carat.

Beiersdorf is about to unveil a new summer line-up of products, due to hit the shops in May. This will include three foam variants in the Nivea Shower range to compete against Cussons’ Imperial Leather Foamburst shower range. A sensitive skin option will be added to Beiersdorf’s medical skincare range, Eucerin.

Two new products will be launched under its Nivea Sun brand to coincide with a &£1.7m print advertising campaign for the range in May. Nivea Sun Sensitive will be relaunched with a different formula.

Beauty rivals L’Oréal and Revlon revealed their suncare ranges last month, the first time both companies have launched their own suncare ranges in the UK. L’Oréal also markets the Ambre Solaire range.

Mothercare’s marketing director Andy King has been made redundant following a review of the business by new chief executive Ben Gordon. King, a former marketing and business development director at WH Smith, joined the troubled retailer in September 2001, and was given responsibility for international and direct operations in addition to marketing (MW 19 July, […]

Five has signed a deal with Foster’s, which will sponsor the six-part series Be a Grand Prix Driver, to be broadcast from April 21. Foster’s already sponsors the British Grand Prix and Grand Prix motor-racing worldwide.

Vidal Sassoon is to sue Procter & Gamble for neglecting his eponymous brand since its acquisition in 1985. P&G withdrew the Vidal Sassoon haircare range in the UK in November (MW November 14, 2002).