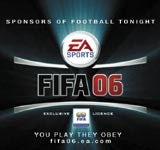 Electronic Arts (EA), the world’s largest video-games company, is to sponsor a sports programme for the first time in the UK, using its FIFA 06 brand.

The company is sponsoring Football Tonight on digital television channel Sky Sports News in a multi-million pound deal. The sponsorship kicks off this week with an initial “teaser campaign” that will expand as the season progresses. The sponsorship is to run until July of next year.

The deal was negotiated through SponsorCom, the sponsorship arm of MediaCom. Wieden &amp; Kennedy handled the creative work.

Football Tonight, which is broadcast daily from 7pm to 10pm, features news and views from clubs as well as score updates of midweek matches. The FIFA 06 idents will feature at the beginning and end of ad breaks as well as in opening and closing credits of the show.

This week EA announced that it has signed Manchester United striker Wayne Rooney and FC Barcelona’s Ronaldinho as “cover stars” of FIFA 06, which is being relaunched next month. Rooney worked on EA’s FIFA 05 in the UK, while Ronaldinho appeared on the packaging of EA’s FIFA Street and FIFA Football 04 games, but under the latest agreement the two stars will act as global ambassadors and will appear on merchandising and advertising material for the football game.

Last month EA predicted a worse year than expected due to its decision to delay the launch of a game based on the Godfather film trilogy until next year. The company also announced its first- quarter results with losses of $58m (&£33.3m) compared with net profits of $24m (&£13.5m) in the same period last year.