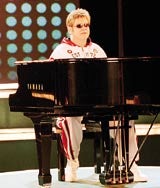 Elton John is to star in a Sky Sports promotion for the forthcoming football season. Singing his new release, ‘Are Your Ready?’, Elton is shown in a studio surrounded by 150 football fans wearing a range of team colours with a large screen behind them on which images appear from Sky’s live football output. The promotion will run across Sky’s channels from July 7. Terrestrial TV and outdoor ads will follow on August 1. Sky’s live coverage for the forthcoming football season will include the UEFA Champions League, Barclaycard Premiership, Nationwide League, the Carling Cup, the FA Cup and the Nationwide Conference, as well as international games played by England, Scotland and the Republic of Ireland.