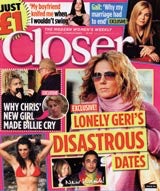 EMAP is in talks with agencies about the &£10m advertising business for its celebrity magazine Closer.

Three undisclosed agencies are understood to have pitched for the business this week. Incumbent DDB London did not repitch. Closer performed well in the latest set of ABC figures announced last month edging past its sister title Heat for the first time.

Closer was launched by EMAP in September 2002 to target women aged between 20 and 60 and aimed to build on the success of its Heat magazine. DDB London, then BMP DDB, handled the &£10m launch advertising and has worked on the brand ever since.

The Advertising Standards Authority responded to 24 complaints last autumn about a TV ad for the magazine, which used its article on the accidental death of a toddler to promote the magazine. However, the ad was already off air as it related to a particular issue.