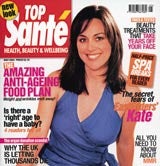 EMAP Consumer Media is planning to extend its lifestyle magazine Top SantÃ© into haircare products, including shampoos and conditioners.

The company has revealed no details about the merchandising deal as yet.

The move is part of EMAP’s plan to extend its key magazine brands into beauty products and toys in an attempt to enter the licensed merchandising market.

Plans are already afoot to launch Smash Hits! toys and FHM wristwatches and boardgames. Distribution deals for the FHM-branded watches are thought to have been signed with retailers such as Debenhams and H Samuel.

FHM already has a range of brand extensions, including a credit card, provided by HBOS. It also produces books, calendars and posters.

A spokesman for EMAP Consumer Brands confirms that brand extension programmes are in place for music titles as well. EMAP music titles include Kerrang!, Q and Mojo.

Rival National Magazine Company has been in the licensed merchandising market for several years, and has extended its Cosmopolitan brand into clothing, watches and eyewear. Good Housekeeping magazine has its own range of branded baking equipment and recipe books.

NatMags also tried rolling out a Cosmo-branded cafÃ© chain, but was forced to abandon the project last year because of low consumer interest (MW August 7, 2003).