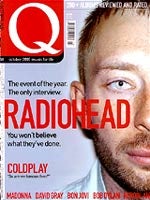 EMAP Digital has struck a deal with HMV to offer the retailer’s CD catalogue through the music websites of its magazine titles, including Q, Mixmag, Smash Hits and Kiss.

The websites will offer a selection of HMV’s 130,000 CDs, which users will be able to order online. HMV will then be responsible for processing the orders and sending out the CDs.

The first sites will be Q4music.com and Mojo4music.com, which will launch in November.

Jerry Perkins, managing director of the EMAP Digital music project, says the websites will receive a share of revenue from selling CDs but, more importantly, the service will enable the sites to increase the value of their banner advertising.

“Selling CDs will be an important revenue stream and it raises the value of the market, which is unproven at the moment.

“But I think [the record companies] will spend more on marketing online,” he adds.

Perkins says the EMAP music project has a budget of £4m this year, out of a total of £250m being invested by EMAP in Internet development over the next three years. Some two per cent of the UK’s £4bn annual CD sales take place online, but this is forecast to rise to at least 25 per cent within five years, he adds.

Paul Du Noyer, editorial director of the EMAP project, says: “We’ll make the sites compelling destinations in their own right, regardless of whether visitors intend to buy.”