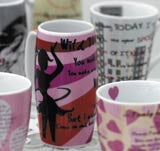 Music publishing company EMI has signed a deal with Morrisons to sell a range of items that feature lyrics of songs owned by the record company.

It marks the start of a strategy for the record company to exploit the ancillary rights to the songs that it owns.

EMI has also created a consumer brand called Trademark, which it will use to sell the products.

One of the first products available is a range of mugs decorated with the lyrics to classic songs including Wild Thing, New York New York and I’m Too Sexy.

The company is also planning a clothing line, greetings cards, confectionery and board games using material from the songs it owns.

The record company is also investigating ways of getting involved in the mobile phone market.

Guy Moot, who became managing director of EMI Music Publishing UK in June, says he was restructuring the company to develop new markets.

He says Channon’s team has already “successfully opened up the exploitation of ancillary rights in areas such as broadcast, film and mobile.” He adds that he wants to diversify EMI’s income stream.