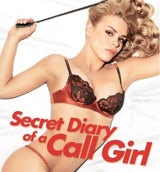 He will manage all Endemol’s marketing activities, focusing on global entertainment formats and also work closely with Endemol Worldwide Distribution on finished programming.

He will also be responsible for Endemol’s corporate branding as well as the group’s internal and business to consumer online presence.

Copestake is the former senior vice president, international marketing, Disney-ABC-ESPN Television. He played a central role in the international roll-out of Disney Channel’s live action franchises including hits such as High School Musical and Hannah Montana.

He is also a former head of marketing communications at BSkyB and a board director at European marketing agency, The Added Value Company.

Endemol’s productions include Big Brother, Deal or No Deal, Secret Diary of a Call Girl (pictured) and Robin Hood.

Toumazis says: “Steve’s outstanding track record in brand communication and strategic marketing has seen him play a key role in the development and continued success of some of the world’s biggest TV franchises.”