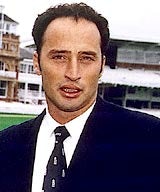 Npower, the utilities company owned by Innogy, has signed up England cricket captain Nasser Hussain to appear in its next TV ad campaign. The deal forms part of the company’s three-year sponsorship deal with the England and Wales Cricket Board (ECB).

It will be the first time that Hussain has appeared in a TV campaign.

The three-year ECB sponsorship deal, worth more than &£11m, means npower will be the sponsor of all England’s home Tests until 2003.

The company also sponsors TV police drama The Bill and is a sponsor of the FA Premier League.

The ECB sponsorship will commence with the first two Tests this summer against Pakistan, followed by the five-match Ashes series against Australia.

Npower is also planning to launch its first interactive ad on TV – a nine-week promotion on The Bill, worth &£250,000, inviting the public to watch the programme and win prizes.

The promotion will run in The Daily Express and OK!, and will be followed by another seven-week promotion with game cards handed out to potential residential and small business customers.

Last month, npower launched its insurance service – the first product in its financial services package, which will be launched in full by the end of the year. The initial launch will include home contents and building insurance services.