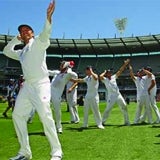 The ECB has launched the search for a sponsor because the energy supplier has refused to match the £20m over four years domestic cricket’s governing body is believed to be looking for. Npower, which signed a two-year deal with the ECB in 2009, is said to pay about £4m a year.

England cricket bosses believe that success against Australia this winter, the team has just wrapped up a 3.1 Ashes series win, has strengthened their negotiating position.

Npower is still in talks with the ECB but is reluctant to pay more next year when it fears that the media and public’s attention will be on the London 2012 Olympic Games.

It is understood that the energy supplier wants to pay a reduced amount for 2012 because of an anticipated lower return on investment.

Npower’s ten-year sponsorship of England’s home test series is due to end after this summer’s series against Sri Lanka and India. It has recently moved into football sponsorship, signing a £21m three-year deal with the Football League last year.