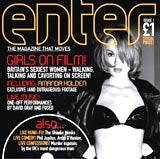 Donna Nicholson, the managing director of interactive men’s magazine Enter, has resigned. It is understood that she has no job to go to.

Nicholson, who joined the company in September 1999, was previously new business director at Partners BDDH.

Her resignation comes as the third issue of the magazine faces a delay of up to two weeks.

It is understood that the magazine is not seeking to replace Nicholson at the moment and that Pure Communications chief executive Niall Austin will take on Nicholson’s responsibilities.

Enter’s editor Sam Delaney, previously deputy editor of Later, says: “We have done a lot of testing in the market and at the moment we’re adjusting the editorial mix of the magazine slightly.

“The third issue will be bigger and better and is in post-production at the moment. It will be delayed by two weeks at the most.”