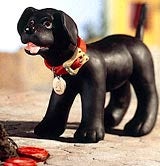 Entertainment Rights is seeking a creative agency to spearhead the &£2m advertising campaign for a new children’s animation, Merlin the Magical Puppy.

The animated series, following the adventures of a Labrador puppy and his magic red collar, will be shown on Children’s ITV (CiTV) from September.

The brand management company is talking to a number of undisclosed creative agencies. It has already appointed Zenith Media to handle media planning and buying for the TV and press campaign that is due to break in July.

Toy manufacturer Hasbro this week won the licence to develop a range of merchandise based on the programme. The range will include figurines, plush toys, toiletries, games and puzzles, and is expected to go on sale in UK stores in September.

CiTV has commissioned 52 ten-minute episodes of Merlin the Magical Puppy, which is produced by Little Entertainment Companies, the animation studio which created Barney the Dinosaur and The Magic Roundabout. The total production budget for the series is more than &£2m.