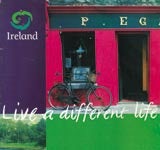 Direct marketing agency Entire has been retained by Tourism Ireland to handle its direct marketing in England, Scotland and Wales for the next three years.

The agency pitched against Liquid Communications, HHM and DLKW Dialogue and will create and implement at least four campaigns a year for the joint venture tourism body, which represents both Northern Ireland and the Republic of Ireland.

Entire will be responsible for all direct activity, including creative work, strategy and campaign management aimed at increasing the number of first-time visitors to Ireland.

Tourism Ireland has traditionally used DM to encourage visitors to return. UK head of marketing Vera Stedman says: “Our direct marketing focus to date has been on fulfilling enquiries and developing those relationships. We are now also looking to increasingly attract new visitors to Ireland through below-the-line channels.”

Tourism Ireland’s annual spend for below-the-line activity is E500,000 (£337,000). The body is also reviewing its $12m (£6.6m) global creative advertising and media accounts, held by McCann Erickson and Universal McCann respectively. A shortlist of agencies is expected to be announced next week. Entire has held the DM account since 2001.