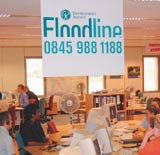 The Environment Agency has appointed integrated marketing agency Marsteller to handle its £2m advertising and direct marketing business, following a pitch. The business moves from Circus.

The brief for Marsteller is to raise public awareness around the issues of flooding. It will also be expected to raise the profile of the Environment Agency as an organisation which helps prevent land from becoming polluted and make it safe when it has become contaminated.

Marsteller is part of the Young &amp; Rubicam Group, which is owned by WPP. The pitch was overseen by the AAR.

Last year, Circus hired broadcasters John Peel and Nick Ross to front a campaign warning people to shake off their complacency about the risks of flooding and use the Environment Agency’s 24-hour floodline.

Circus created press ads showing how flooding can devastate people’s lives by destroying irreplaceable items such as wedding dresses and family videos. It was also responsible for PR stunts such as a Flood Action bus mocked-up as a flood-damaged sitting room.

The Environment Agency was created in 1996 out of a merger between the National Rivers Authority, Her Majesty’s Inspectorate of Pollution and sections of the waste departments of 83 local authorities across England and Wales.

Siemens is poised to cut its £10m association with Formula One after an internal rethink of its Siemens Mobile sponsorship. Siemens Mobile’s £5m contract with McLaren Mercedes F1 team expires this year, while its £5m deal with F1 rights-holder Allsport as the official supplier of communications is up for renewal next year. Industry sources close […]

Wilkinson Sword has launched a Manchester United-themed shaving gift set range. The company, which is an official partner of Manchester United, will support the launch with stadium advertising in November.