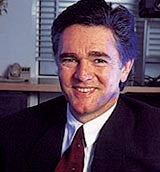 Leagas Delaney, one of the few remaining independent agencies, has been sold to a Canadian marketing and communications group in a deal worth &£59m.

The agency, which counts Barclays, Adidas and Italia Telecom among its clients, has struck a stock and cash deal with Toronto-based Envoy Communications.

Envoy is a holding company which specialises in design, marketing and technology. It floated on the Toronto stock exchange three years ago and has used the funds it raised to make several acquisitions. Leagas Delaney is the company’s first major investment in advertising.

Commenting on why the agency sold itself to Envoy – rather than to another group, such as WPP – Bruce Haines, Leagas Delaney’s group chief executive, says: “We weren’t interested in being someone’s third-string agency. It is a clean deal and we have no client or personnel conflicts.”

The deal will net the agency’s chairman and founder, Tim Delaney, up to &£18m. Leagas will have two seats on Envoy’s board and Envoy will have one place on the agency’s board. Who will take up these positions has yet to be decided.

Haines says the deal will enable Leagas to tap into Envoy’s technology resources, an area it had previously only “dabbled in”.

Earlier this year, Envoy acquired UK design agency Gilchrist Brothers, and it is understood to be seeking to buy another UK design agency. Two years ago, it bought the New York shop Hampel/Stefanides.