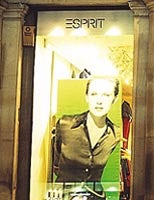 The retailer, which opened its UK flagship store in London’s Regent Street in May, has signed licensing agreements with US-based Carole Hochman Designs, Backflips and the Levy Group to create the lines, which will be launched as part of the chain’s spring collection next year.

Carole Hochman Designs will be responsible for the nightwear, daywear and loungewear ranges, while the Levy Group will design a range of women’s outerwear. Backflips is producing a line of girls’ swimwear, which is to be launched this summer.

The opening of the London store signalled Esprit’s return to the UK market after a three-year absence. The company, which closed its nine loss-making UK outlets in 1998, is opening a second UK store at Bluewater in Kent in September.

Esprit already has licensing agreements in place to produce women’s swimwear, eyewear and bath and home products. The Esprit brand is sold in 44 countries.

The RAC is launching a functional caffeine drink called RAC 124, which will help keep sleepy drivers awake at the wheel. The fruit-flavoured drink, which has twice as much caffeine as Red Bull, gets its name because 124mg (or two cups of coffee) is the amount the Highway Code recommends if you are feeling tired […]

While your article about giving to charity (MW June 28) raises concerns about the problem of encouraging young people to regularly donate money to charity, the statement by Paul Seligman, managing director of 141, that “young people don’t necessarily have bank accounts, and they are generally quite scared of direct debits,” is misleading. Independent research […]

Outdoor company Maiden is to take its first step into the international market with the purchase of three Irish-based companies – Canberra, Network Poster Advertising and Outworks. The companies will be merged into a new venture to cover Dublin and all the major cities in Ireland. The new venture will be headed by Colm O’ […]