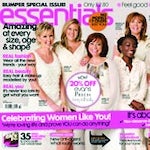 All the content including the fashion and beauty pages and a naked body confidence photo shoot in the health section feature real women.

IPC says the model-free issue is a “media first” for women’s glossies. The monthly magazine will feature real women on its covers from now on, in place of celebrities or models.

Essentials launched a social media campaign asking women to tell the magazine why they should appear on the front cover. Entrants were then short listed and Essentials held a casting session with the editor and style director to pick the final 10.

Jules Barton-Breck editor of Essentials. says a recent reader survey revealed that 70% of women would rather see a real woman on the cover than a celebrity.

Essentials publisher Ilka Schmitt says: “Celebrating our readers by putting them on the cover is a brave move, but it just feels right for Essentials. Essentials is a woman’s magazine that offers something different and more and more women are discovering that.“

In the latest set of ABC figures Essentials reported a 12.9% circulation year-on-year increase, performing ahead of many of its rivals.

The model-free issue will be advertised in a number of IPC other women’s titles such as Marie Claire, Ideal Home and Woman, via social media and online.