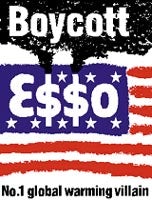 Esso has bowed to pressure and will no longer be headline sponsor of the Tree Council’s National Tree Week.

The oil giant will remain a sponsor of the event but its name will no longer be given prominence. A spokeswoman for National Tree Week says: “Esso suggested [the change] to the Tree Council, as it didn’t want to attract any adverse publicity for the event.”

She also admitted that Esso’s name had been taken off the title after calls from Greenpeace and Stop Esso campaigners. It is understood that several organisations involved in National Tree Week also pulled out because of Esso’s involvement in the event.

The Stop Esso campaign was launched in May following the collapse of the Kyoto Accord talks on climate change. Esso’s parent company Exxon Mobil was blamed for influencing President Bush’s decision not to ratify the treaty.

A spokeswoman for Stop Esso says: “This is a good message for the Tree Council. It should find a new sponsor for next year.”

She adds that the group plans to gather at 200 Esso stations on December 1 and lobby motorists to boycott the company.