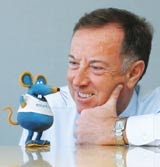 Michael Winner, the film director turned gastronome, has been dropped from Esure’s advertising as the internet insurer pushes a new image. The highly successful ads – which were also rated as the most irritating campaign of last year – will give way to an animated character called Mister Mouse, as part of Esure’s new &£20m advertising blitz.

Winner has been directing and starring in Esure commercials since the insurer took its advertising in house in 2002. The ads featured the much-parroted “Calm down, dear” line.

Unveiling the new-look campaign, chairman Peter Wood took a pot-shot at “copycat competitors”. He spoke disparagingly of “flattering similarities” in ads aired by rival Direct Line, the UK’s second-largest motor insurer, and Privilege. Both are owned by Royal Bank of Scotland.

In the new Esure campaign, Winner has been displaced by the stop-motion animated Mister Mouse, who will appear in television, press and poster advertising from this week – including one in every 20 UK poster sites over the next four weeks – backed by the line “insurance at mice’s prices”. The character has been created by Sian Vickers and Chris Wilkins, who worked with Esure chairman Peter Wood to create the Direct Line red phone in the 1980s.

The campaign will also include radio advertising.

Speaking at the launch of the new image, Wood, who combines his role as chairman with that of group marketing director (MW October 13, 2004), insisted that Winner had not been axed permanently. A company spokesman adds: “Michael Winner has been a winning formula for Esure and continues to be involved with the brand. This new campaign doesn’t signal an end to Michael Winner – he will feature again and he also remains with us as an important adviser.”

Esure, which was created four years ago by Wood as a joint venture with HBOS, is the UK’s fastest-growing insurance company, and last month topped 1 million policies. As part of the rebrand, it will widen its target market, by dropping its requirement for a minimum of four years’ no-claims discount. Loans and pet insurance will also be offered later this year.