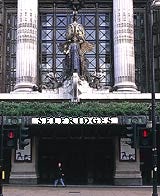 Bidwell, who joined Selfridges this week, left Etoys in January this year after the company decided to close down its UK operations.

He replaces Nick Cross, who was poached by online financial services company Egg in March.

Bidwell will oversee Selfridges’ expansion programme as well as the redevelopment of the original Oxford Street store in London. The company will open a store in Manchester next year and another one in Birmingham in 2003. It is also looking at further sites across the UK.

Before joining Etoys, Bidwell worked for five years at the theme park division of Walt Disney Attractions, where he oversaw the UK and European marketing for Disneyland Paris and Walt Disney World.

Bidwell will report to Selfridges chief executive Vittorio Radice. A spokeswoman for the retailer says it is too early to say whether Bidwell intends to review Selfridges’ £2m advertising business.

Since parting company with Bartle Bogle Hegarty in 1999 the company has worked with a number of creative agencies.