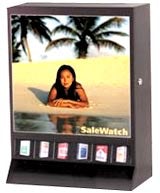 Cigarette-vending machine operators are preparing a legal defence to European Union (EU) plans which could see the machines banned across the continent.

The European Commission is preparing research, to be finalised next year, to establish whether cigarette vending machines give under-age smokers easier access to cigarettes.

The commission has confirmed that, if the research finds a strong link between the two, a directive to ban the machines would be a possible course of action.

But research carried out for the European Tobacco Wholesalers Association (ETWA) by Deloitte and Touche says a directive would have no legal basis on the grounds of public health, consumer protection or competition under EC treaties.

The work will be discussed by ETWA members – European vending operators including the UK’s National Association of Cigarette Machine Operators – next month.

ETWA secretary general Peter Lind says: “[The EU] can try and introduce a directive but we will be prepared.” John Carlisle, of the Tobacco Manufacturers’ Association, condemned the plans. He says: “Once people [in the European Union] get a taste for this kind of legislation they tend go further than necessary.

“There is no evidence to suggest machines are being abused, and further legislation is totally unnecessary.”

Carlisle says the machines are a valued distribution channel for tobacco manufacturers, representing 4.5 per cent of UK sales by volume.