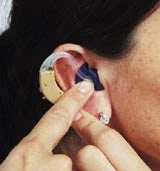 The Royal National Institute for the Deaf (RNID) has appointed Euro RSCG London to handle its &£4m UK advertising account as it plans a major campaign for later in the year.

Euro RSCG London won the account earlier this week after pitching against Ogilvy &amp; Mather and JWT. The agency has been tasked with developing and implementing the RNID’s biggest campaign to date, which will include television spots for the first time.

The awareness campaign will aim to promote the use of hearing aids and take away the stigma that some people attach to them and to people with hearing loss.

The charity is already involved in an exhibition at the V&A called Hearwear, a display showcasing radical designs for hearing aids, incorporating them into jewellery and trendy glasses.

RNID chief executive John Low says that millions of people who could benefit from wearing hearing aids do not do so. “With the rise of new technologies there is a blurring of the edges around hearing products,” he says.

Watson Phillip Norman won the charity’s direct marketing account in 2004 and was tasked with increasing the number of long-term donors.