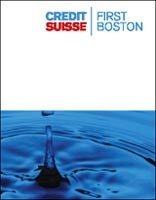 The two agencies were shortlisted after an initial pitch which included two other undisclosed Swiss agencies.

Credit Suisse Group last advertised in 1997, with a press campaign through EURO RSCG. The agency was asked to complete the one-off project but has now been appointed as global branding agency.

The £12m global campaign will comprise television, press and online advertising. The campaign, aimed at raising awareness of the group, will be developed by the London office of EURO RSCG and then rolled out internationally.