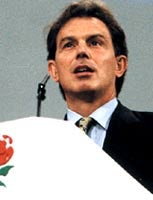 The new advertising campaign by the Labour Party marks what must surely be the opening shots in a long pre-election campaign leading up to D-Day next May. And while the state of the economy, education, the health system and transport infrastructure will undoubtedly be high up the agenda, it is inevitable that the single currency and other elements of the UK’s integration within Europe will play a highly visible part.

A complex, multi-faceted issue such as this highlights one of the difficulties of using advertising or other marketing techniques to promote a party or a cause. In an election, winning on the day is everything – there is no comfort in emerging as a number two brand, even a strong one. And the campaign ideally should be simple, short and sharp, since the target audience often sees picking a government as very much a distress purchase, to be accomplished with the least possible expenditure of time and effort.

In contrast, communicating the true merits or indeed disadvantages of a major and probably irreversible step like further European union is a process that should take months if not years and should proceed across many fronts. Previous research by Grey International shows that one of the reasons why the EU has not achieved the popular support it has been seeking is the lack of a sophisticated, long-term initiative that explains the issues and addresses people’s real concerns, fears and confusions about what is involved.

Take the national referenda on Europe which have been run in many European countries over the past few years. Grey’s analysis demonstrated that many of the campaigns were fragmented, short-term and lacked professionalism, and there was little evidence to show that they played an important part in voting decisions.

However, Austria, which voted overwhelmingly in favour of EU membership, was one exception. The pro-EU campaign was carefully planned as a long-term process and executed using different techniques for different purposes. As well as the advertising in the run-up to the vote, there was a PR drive that ran for years rather than months and a one-to-one approach with well-designed direct information packs that went to every household in the country, backed up by a 24-hour telephone help-line.

The lesson is clear. Only by adopting a strategically planned, long-term, multi-channel and comprehensive operation – rather like a good marketing campaign, in fact – can governments effectively communicate a view on an issue as complex as this.

Not that there will be much room for such considerations over the frenetic next few months, when winning seats in the election will be the all-consuming concern for all three UK parties. Labour has a tricky EU conference to negotiate in the first week of December while the Tories will be searching for ways to turn the hardline Euro stance into the vote-winner they believe it should be.

However, if the much-discussed referendum on the single currency ever materialises, the communications lessons are clear for both pro and anti-EU organisations.