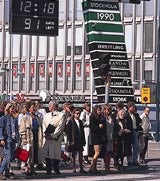 It appears that technology is on the brink of creating an all-in-one “digital lifestyle”. A life in which work and education take place at home and entertainment can be experienced anywhere. According to a report by Euro RSCG Worldwide – Wired and Wireless: High-Tech Capitals Now and Next – which studied 19 hi-tech cities around the world, “digital living” now plays an intrinsic part in the everyday lives of consumers.

Euro RSCG chose the hi-tech cities on the basis of how much the population has embraced technology, as demonstrated by higher-than-average penetration rates of the Internet and mobile phones.

Gone are the days that a hi-tech lifestyle was dependent upon landlines and PCs – now, the only apparatus needed for connectivity can be held in the palm of a hand. This means that wireless solutions – not necessarily via mobile phones – are the future. When asked how most people will access the Internet in 2025, just 14 per cent of Europeans say “via computer” and 15 per cent say “via mobile phone” while 48 per cent agree that there will be another type of wireless device by that time. An additional 23 per cent say “via the television”.

A broad shift to wireless communication and Internet access will present marketers with new challenges. The study suggests that the limitations of hand-held technology, such as the small screen size, may impinge on the perceived pleasure of “traditional” Internet shopping. But for those who have adapted to a digital lifestyle, mobile devices may actually enhance the shopping experience by combining multiple platform offerings. For instance, marketing campaigns that offer digital coupons via mobile devices could encourage consumers to visit their favourite website or brick-and-mortar store, or even make purchases directly through the mobile device.

For marketers, one of the most sobering findings is the degree to which advertising and point-of-purchase promotions fall flat when it comes to disseminating information and initiating consumer desire for technology. Just 12 per cent of the European sample say that they get most of their information on technology products from advertising and a mere one per cent say they get it in stores. By far the most relied-upon source of hi-tech product information is word of mouth: 21 per cent ask work colleagues, 13 per cent call upon friends and three per cent rely on family members.

The message for marketers is that budgets would be better spent on creating a “buzz”- positive word of mouth – and brand building rather than on traditional advertising. Identifying and reaching influencers is likely to yield a better dividend in terms of generating excitement and, ultimately, sales.

Respondents’ unwillingness to remove their children from brick-and-mortar schools stems, in part, from an underlying sense that new technological devices are leading to increased isolation – 36 per cent of Europeans agree with the statement “technology is harming our sense of humanity”.

The study reveals new centres of “cyberpower”. The study finds that the cities of Amsterdam, Copenhagen, Helsinki and Stockholm are without doubt the worldwide digital trendsetters and collectively calls them “cyberspoon” cities.

The Finnish population is the most enthusiastic about being at the forefront of mobile technology usage, with 45.5 per cent of respondents in Helsinki indicating that they live in a hi-tech household and use the Internet and wireless devices daily.

Amsterdam isn’t far behind – 43 per cent of its population uses the Internet and wireless products every day. The Dutch are also mobile-phone enthusiasts, but the study shows that WAP-enabled phones have yet to make inroads in Amsterdam. Though 91 per cent of Dutch respondents say they own a mobile phone, only 27 per cent have a Net-enabled cell phone.

Sweden, meanwhile, is reputed to be one of the most wired and wireless nations on the planet. It’s a country where the subways are wired to allow mobile-phone operation underground.

Denmark is also a European “tech leader”, but with a lower profile than that of Sweden. The two countries share a forward-thinking outlook, as shown by the fact that Swedish appliance giant Electrolux recently field-tested its Screenfridge – combining a refrigerator and computer – among Danish consumers.

The research concludes that these European cities embrace technological advances and new products as quickly as they are introduced, incorporating them seamlessly into their everyday lives. In these cities, the use of technology doesn’t merely influence the local culture – to a great extent, technology has become the culture.