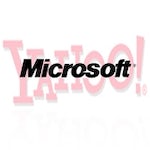 The deal was struck by the two companies last July to allow Microsoft and Yahoo to compete more effectively against Google, which has almost 90% market share in the UK alone.

It’s also being assessed by the US Department of Justice, with a decision expected by June.

The deal was announced a month after Microsoft lauched Bing, its lastest attempt at breaking the search market. In the six months since rollout Bing has gained traction, being the fastest growing search engine in the US in December.