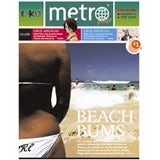 Metro International, the publisher of the international editions of the daily freesheet, is launching special summer editions to target readers holidaying on the beaches of France, Spain, Italy and Greece.

Metro, which has 69 free daily newspapers across 21 countries, usually ceases production of its European titles during the summer while much of its core readership is away on holiday.

But the publisher hopes a 2.5 million print run of summer editions will offer advertisers the opportunity to target 18- to 45-year-old consumers during the holiday season. The special editions will break with the usual Metro tabloid newspaper format and switch to a glossy A4 magazine, which includes a mix of local and people news, features, festival listings and television guides.

The French edition of Metro International has already stopped production for six weeks but will be replaced by Metro Plage, to be distributed weekly by promoters across the country’s main beaches.

The Spanish summer edition will be distributed daily throughout August, while in Greece and Italy the editions will be one-offs available from July 21 and August 4 respectively. Each edition will be published in its market’s native language in order to attract the high percentage of holidaymakers in mainland Europe who prefer to spend their holidays within their own country.