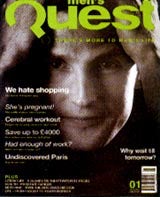 Blue Sky Brands has made much of its debut magazine for men, called Men’s Quest.

It fiercely rejects the bums, tits and flash-cash approach of many other men’s magazines, preferring to target the thinking man.

So the Diary was a little surprised to find that the launch party was in the nightclub Sugar Reef, a hang-out for celebrity wannabes, situated metres from the sex shops of Soho.

Looking perfectly at home in the venue was Piers Hernu, editor of lads’ mag Front, who turned up for the launch with his usual band of hangers-on.